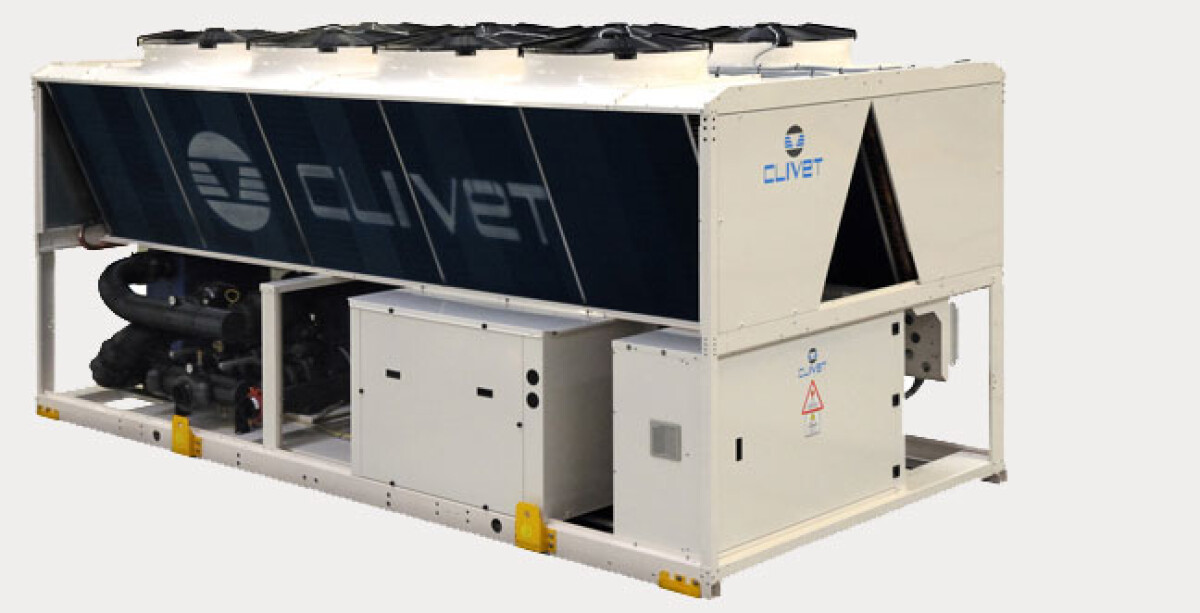 HVAC plants operate at full load for less than 5% of the time. This is the reason why for over 10 years Clivet has been producing liquid chillers capable to deliver maximum efficiency at partial load operation (and therefore in the seasonal cycle) thanks to the reliable modular Scroll technology, now internationally known and acknowledged.

Today Clivet presents SPINCHILLER2 the new air cooled liquid chiller series from 200 to 650 kW. SPINCHILLER2 is a unit for outdoor installation with multiple Scroll compressors on the same circuit, electronic expansion valves, and high efficiency plate evaporator. SPINCHILLER2 has very high seasonal efficiency (ESEER) and is available in two versions: EXCELLENCE and PREMIUM. The standard EXCELLENCE version offers maximum efficiency both at partial load and at full load operation. Thanks to ECOBREEZE fans with permanent magnet electronic controlled motor, the seasonal efficiency ESEER reaches 4,6 while operating at constant supply temperature , but can also  go over the equivalent value of  5,2 thanks to the new control system with dynamic outlet temperature variation on the basis of the load. EXCELLENCE SC  stands out also for the very high full load efficiency (EER) which goes over 3,1 and places it in Eurovent energy efficiency “A class”. As an alternative, Clivet offers the PREMIUM version, which has excellent performances at partial load, but privileges the compactness, being also more competitive.

Suitable for different types of application, with fan coils, air handling units, radiant energy distribution and chilled beams, SPINCHILLER2 is also available with total or partial energy recovery for free hot domestic  water production, for operation with low liquid temperature (Brine) and double set-point in industrial processes and in applications with high dehumidification, as far as with direct FREE-COOLING in all applications that need cooling even with low ambient temperature.

Moreover, SPINCHILLER2 simplifies the plant, because it can integrate in itself many components such as HYDROPACK pumping groups with assisted start-up, storage tank for plants with  low  water content and also primary circuit on board.