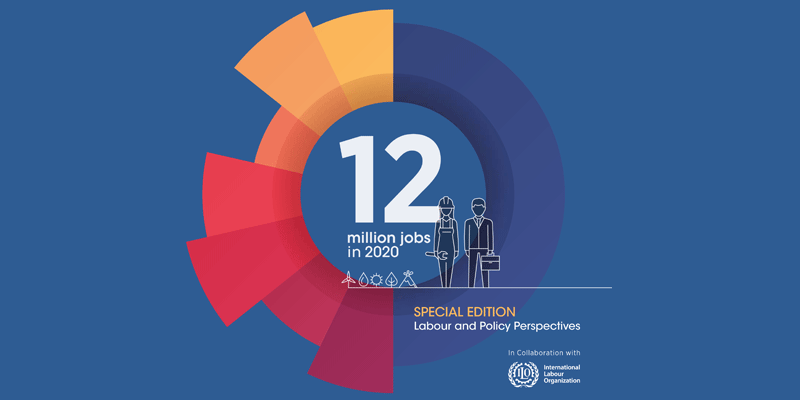 In collaboration with the International Labour Organisation (ILO), IRENA recently published the "Renewable Energy and Jobs" review, which illustrates the evolution of global employment related to renewable energies for the year 2020 and reasons on the future scenario of this sector, in relation to the achievement of the climate goals set for 2050.

IRENA began drafting this annual document several years ago, in 2012, when 7.3 million jobs were linked to renewables, but over time, with the various decarbonisation initiatives that have led to swift technological evolution in this sector, employment has seen steady growth, reaching 12 million jobs in 2020.

Of these, 4 million can be attributed to photovoltaics, the leader on the renewables market, followed by 2.4 million workers in the biofuels sector (mainly located in Brazil, Indonesia and the United States) and 1.25 million to wind power, of which 44% is accounted for by China alone, the top player in this field.  Of these 12 million, 1,300,000 jobs in renewables are currently located in Europe, where solid biomass predominates, followed by wind, liquid biofuels, photovoltaic, hydroelectric, biogas, geothermal, waste-to-energy, solar heating/cooling, and ocean energy.

The growth in employment in the clean energy sector is also due to the progressive drop in related costs and more or less constant investments made over the years. In addition, research into the green transition is developing new renewable technologies, which IRENA says could contribute to a further increase in the number of jobs: energy storage could be employing 10 million workers by 2030, while green hydrogen could account for a 2 million increase between 2030 and 2050.

Job creation related to renewables relies mainly on the ability of governments and administrations to build and consolidate national supply chains, on their support for the cause through appropriate industrial policies, and on the investments and incentives made available to reap the socio-economic benefits of decarbonisation and energy transition.

But if this growth in employment created by renewable energy is so evident and rapid, it is fair to ask whether workers employed in this sector will require any particular training. What kind of education will be needed in the future to work in the field of renewable energies?

According to analysis by IRENA, if we achieve the Paris Agreement scenario of limiting the temperature increase to 1.5°C, of the 122 million jobs that renewables are expected to create by 2050, 50% will require a primary or lower secondary education, 37% will need secondary education and the remaining 13% will require a higher qualification, such as a bachelor's, master's or doctorate, on the understanding that many of the skills that those currently working in the fossil fuel sector have are in line with those required in renewables.

This further underlines the fact that the 'green revolution' is not just about technology development and the transition of energy systems—it has a holistic approach, which also includes the social and economic sphere.