Published the analysis of the Norwegian institution DNV 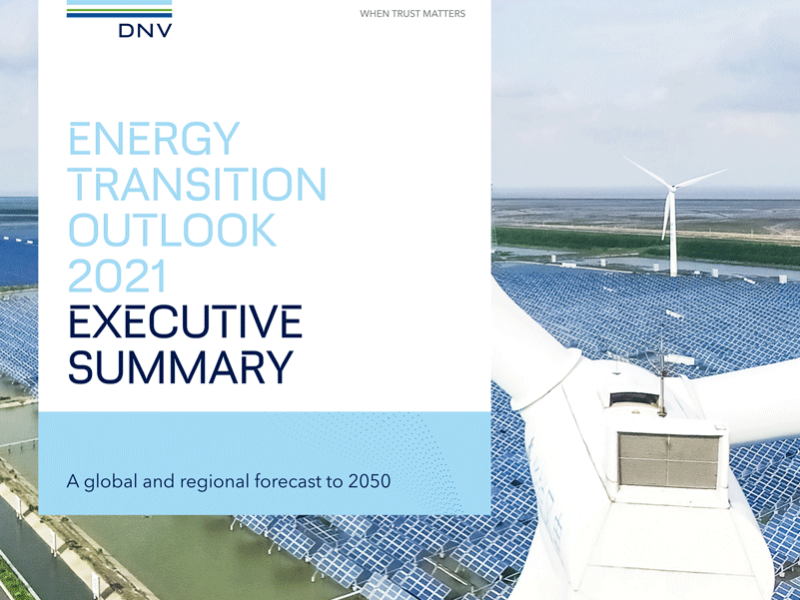 Energy Transition Outlook 2021 has been published by DNV, a Norwegian risk management assessment and targeting agency operating in various sectors, such as energy, finance, IT and health; document presenting current and future scenarios for the energy sector and its transition to sustainability.

Climate change remains one of the most urgent issues in the world, and the impact of global warming on the environment is clearly alarming. According to the DNV report, pollutant emissions decreased in 2019 and 2020, but this was an exceptional event, caused by the pandemic from Covid-19. Now, in fact, consumption and emissions are recovering their values before the health crisis and it is estimated that they will continue to grow in the next 3 years, before starting to fall steadily.

By 2030, CO2 emissions will be reduced by only 9% compared to the values recorded in 2019, and it is expected that by 2050 they will be reduced by 45%. Percentages in contrast with what was established at European level, as they do not respect the percentages set by the European Commission. In fact, the objectives set by the Paris Agreement are not being achieved: we are already at maximum to limit the rise in temperature to 1.5% and according to DNV forecasts the average temperature increase will reach 2.3% at the end of the century. The Paris Agreement was signed in July.

With regard to energy, there has been a strong growth in electrification and it is estimated that renewables will beat all other energy sources. The electrification of final energy demand will grow from the current share of 19% to 38% by 2050, and will be powered mainly by solar and wind, which are already the two cheapest forms of energy supply virtually everywhere. By 2050, solar and wind will account for 69% of energy production in the grid, while fossil fuels will be reduced to 13%.

50% of the sale of passenger vehicles will concern electricity in 2032 and the use of heat pumps will triple, providing 32% of the heat in 2050 consuming 9% of the use of energy for heating. Efficiency gains will lead to a flattening of energy demand since the 1930s. Energy efficiency remains our greatest resource not yet fully exploited against climate change and energy efficiency targets are driven mainly by electrification processes.

Analysis shows that fossil fuels are gradually losing position, although they will still maintain a 50% share in 2050. Gas remains in its current position, while the demand for oil will be halved, and by 2050 the use of coal will be reduced by a third of the current one. The spread of carbon capture and storage systems is too slow, and only 3.6% of CO2 emissions will be reduced in 2050.

The period we are experiencing is certainly not conducive to the situation. Spending on global economic recovery for the crisis caused by the Covid-19 pandemic inevitably led to scenarios other than those envisaged. Apart from the initiatives of European countries, the packages and incentives provided by the various world governments for the energy sector are anchored in high-emission systems, instead of aiming at solutions that foster the energy transition.

But in spite of everything, variability and reduced energy prices do not hinder the development of energy systems using renewable sources. Power-to-X, storage, connectivity, demand management and the price of coal will help help the growth of solar photovoltaic and wind to maintain their competitiveness. Solar coupled to storage, in particular, is becoming a new category of very strong energy production, which will provide 12% of all electricity connected to the grid by 2050.

The decarbonisation of the "hard-to-abate" sectors requires instead a greater scalability of hydrogen, electric fuels and biofuels, because if combined, hydrogen and electric fuels would cover only 5% of the global energy demand for 2050. The heavy industries and those of maritime and air transport continue to increase their share of polluting emissions and remain linked to a massive use of fossil fuels.

As for hydrogen, by 2050 most of it will be produced by special electrolysers that will use renewable sources. Green hydrogen will dominate: 18% will be produced by electrolysis that exploits electricity in the grid at low cost, and 43% by electrolysis that uses renewable sources such as solar, onshore and offshore wind. Blue hydrogen will lose its economic advantage, and by 2050 it will provide only 19% of the energy resource.

To conclude, the DNV Energy Transition Outlook also shows a forecast of how the world’s primary energy supply will be configured according to the energy source. In this, renewable energies will contribute strongly, while fossil fuels will reduce their share (apart from natural gas, which will fall only since 2040). The share of fossil fuels in the energy mix will drop significantly from 80% today to 50% in the middle of the century. Nuclear power will remain stable at 5% throughout the period, while renewables will triple their share, which from the current 15% will reach 45% at the end of 2050.