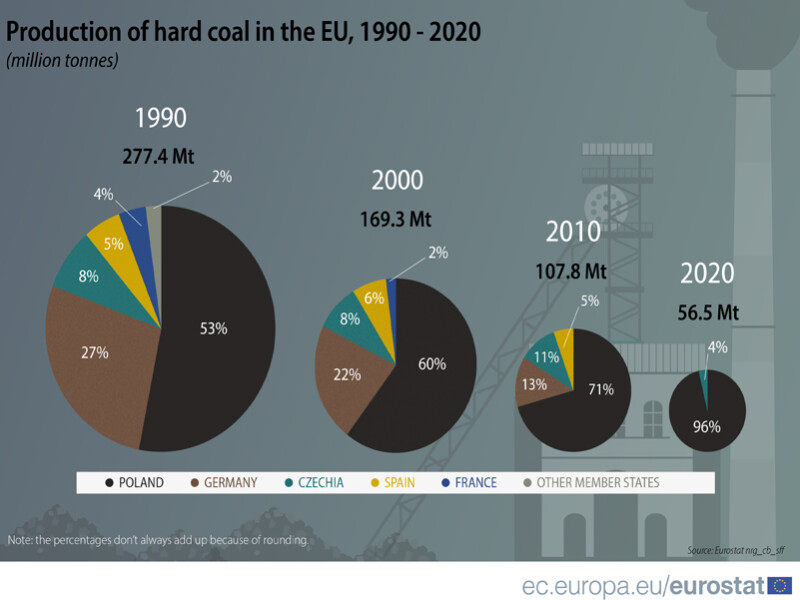 Production and consumption of fossil fuels continue to decrease even during 2020, following a trend that had been observed in 2019 and that now continues, more or less continuously, since 1990. According to Eurostat statistics, last year coal consumption decreased by 35% and lignite consumption by 33% compared to 2018. Certainly, the coronavirus pandemic has affected these results, although experts are convinced that the most obvious effects will occur in a few years' time.

In 2020, 56 tonnes of hard coal were produced within the European Union: a substantial decrease that is recorded not only in production, which fell by 80% compared to 1990, but also in the number of producing Member States, In 1990 there were 13 of them and now there are only two (Poland and the Czech Republic).
Last year, the consumption of coal in EU countries was estimated at 144 million tonnes, 63% less than in 1990. The progressive decrease in the consumption of hard coal is due to the increasing use of alternative energy sources, such as natural gas and renewable energies for electricity production, and the lower production of cokiera coal, used in various industries such as iron and steel.
Lignite also follows the trend of hard coal: according to Eurostat data, 264 million tonnes were consumed in 2020, 64% less than in 1990. 95% of the total consumption of lignite in the EU is attributable to 6 countries: Germany (44%), Poland (19%), the Czech Republic (12%), Bulgaria, Romania and Greece, and the data on the production of lignite are almost equal, as this resource is almost always consumed in the countries of production (while trade is very limited).
The downward trend in coal production and consumption, as shown by Eurostat statistics, therefore shows that the conditions are in place, in the coming years, a complete energy shift towards more sustainable energy sources that do not release greenhouse gas emissions, as do all fossil fuels, responsible for irreparable environmental damage increasingly evident and recurrent.
HVAC-R news
Stay tuned!
By signing up, you consent to our privacy policy Privacy Policy